To Tracy and Neil. Many thanks for all your help and support in arranging Mum’s goodbye. You made it very easy and stress free, also many thanks to all the team that were with us on the day

To Tracy, I just wanted to say a huge thank you for all your help and guidance in making John’s funeral go as planned and for all the other members of staff that were involved on the day. It was of great comfort to me in dealing with yourself as I already knew you for looking after me with dad’s funeral last year. It is a very sad and difficult time for me and my family but thankyou for your compassion and kindness shown

Thank you so much for making a sad and painful time so special to me, I will always look on you as someone with a lovely kind heart, one special person although I have only met you a few times, you have made the saddest time in my life something to remember as a memorable not sad days

I have worked with Tracy as a funeral arranger on a whole range of funerals and found her to be excellent. Whilst she is efficient and organised; thereby taking some of the strain off clients at a very trying time, she is also a very sensitive and caring individual who has the best interest of her client at heart; tempering understanding with a helpful and caring attitude. Every client is special to Tracy

I have officiated at a number of funeral ceremonies with Neil and always found him to be dignified in his demeanour and expert at supporting mourners and grieving families with sensitivity and a sense of decorum that reassures them at what is, a very difficult time. Neil cares for those around him at a very emotional time and always treats everyone with respect and patience. His management of pre and post ceremony is always exemplary, creating a caring and organised environment in support of his client, families and mourners

Exceptional service with a history of experience

Durrant funeral Services was established by Neil and Tracy Durrant in 2019, following Neil’s decision after a long career in funeral service with a large regional co-operative society, to setup his own funeral service, aided by his wife Tracy, where personal service is more important, caring for family’s at a time of loss like they were part of our own family.

We want to provide a service where you see the same people all the way through the funeral arrangements, from the initial call, right till we leave you at the end of the funeral. We want the relationship not to end there, but indeed that we can always provide support and guidance following the funeral, where you are always welcome to call in and see us, chat over a tea or coffee, and put the world to rights. 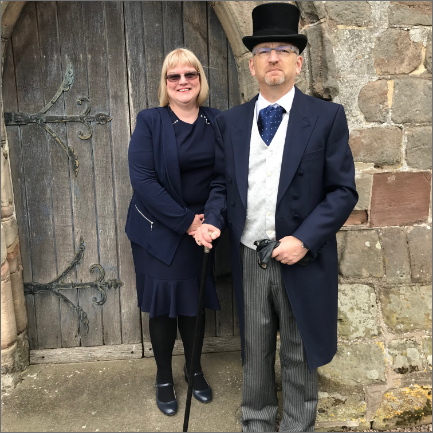 In 2015, Neil met Tracy, who had just joined the company after a career as a teaching assistant at John Bamford Primary School in Rugeley. In March 2016, we married, and Tracy continued to work in a Uttoxeter funeral home, where she was highly respected by all families she dealt with.

Between us we have over 40 years’ experience in funerals and can advise and arrange any funeral, be it religious, non-religious or personalised to reflect the person’s life. Member of the British Institute of Embalmers

I started my career in 1981 for a small family funeral directors in Worcestershire as a funeral assistant, where I was encouraged to study for his embalming and funeral directing qualifications, in November 1985 the business was taken over by a large regional Co-op, as a funeral director and group manager around the midlands, I worked for them until February 2019, when I decided to open my own funeral home to provide a personal caring service to the local community at a fair price.

In 2015, I decided on a career change which brought me into the funeral profession working for a large regional Co-operative society. I was able to use my transferable skills from being a teaching assistant caring and nurturing primary age children into the funeral profession by caring for the loved ones of the grieving families, offering advice and support to them when arranging funerals